In the 1960s, Milton Friedman famously explained that "there's no such thing as a free lunch." If the government spends a dollar, that dollar has to come from producers and workers in the private economy. There is no magical "multiplier effect" by taking from productive Peter and giving to unproductive Paul. As obvious as that insight seems, it keeps being put to the test.

You can do that voluntarily by sending a check to the US Treasury and that would be fine and acceptable because it's your choice (freedom) alone. Unfortunately, that's not how the system of taxation operates. Everyone is forced to pay taxes or face fines, penalties, or jail time. There is no liberty in being coerced to pay taxes.

There are two types of taxes: what you pay by threat of law and what is stolen from you in the form of inflation. Most of us are aware of direct taxation but clueless about the other silent tax. Government programs are financed by a broke govt borrowing endless paper money backed by tax slaves and in the end it just makes everybody just a bit more poorer although they just don't realize why.

Eventually, the world will wake up and the way it's turning out, I'm pretty sure the rest of the world will see first what Americans are too distracted to see.  Governments around the world are broke and they are coming after the money you and I have saved.  Cyprus is the latest example and those that say it can't happen here are in denial.  It's been happening here since 1913.  The government here, in partnership with the Federal Reserve, just aren't as obvious about it.

Learn the difference between a hard default and a soft default.  By all appearances we are headed towards the latter which is why the public is so unaware.  On the surface, things seem fine but still waters run deep.

Posted by JLM Wealth Strategies at 9:38 AM No comments: 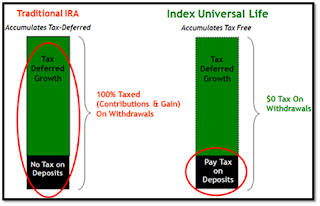 As an advisor, I have been on both sides of the debate in promoting Indexed Universal Life (IUL) insurance policies.   When I renewed my life insurance license in 2007, the independent marking organization (IMO) I chose for my business focused my training was solely on IULs.  Naturally I thought they were greatest invention ever created for savers everywhere because I had no exposure to any other perspective.  It wasn't until a year later I learned about dividend-paying Whole Life policies.  IULs suddenly no longer looked so hot to me.

While the market for advisors selling IULs has increased considerably as more advisors jump on the bandwagon, unfortunately the arguments for putting hard earned money into such a policy have not improved.  Before I get into why that is I do want to point out the positive aspect of IULs.

An Indexed Universal Life (IUL) policy offers the potential for  better asset accumulation compared to a 401k plan because your principal is protected from stock market losses and your gains are locked in. You also get access to your money when you need or want it tax-free. See the image above.  That's the good part.

Now for the rest of the story.  Shall we?

Now here's what your agent or advisor won't tell you. All types of universal life insurance policies have the same cost structure which is a 1 year renewable term.  When you are young this is fine, but as you age the cost of your 1 year renewable term in a universal policy rises considerably WHICH EATS INTO YOUR CASH VALUES regardless of what the stock market does. It creates an opportunity for a perfect storm in retirement that you absolutely don't want: money coming out of the policy to pay for escalating annual mortality expenses.  Add in the potential for low or no market returns and you suddenly carry the burden of risk of having your retirement nest egg wiped out far sooner than you ever would have expected.  This is especially true if you were sold on a policy with an advisor who used an illustration that assumed 7%+ compounded annual rates of returns along with a large spread (1% or greater) on interest rates to borrow money for income purposes.

The point I'm making is that these policies carry a huge risk but most people are not savvy enough to see because they are distracted by advisors promising juicy returns that the market cannot fulfill.  Here's an example on what I mean.  Your advisor will likely assume a 7% Rate of Return compounding for the contract's life.  At age 65, the policy owner starts taking loans at 5% each year for the rest of their life.  Suddenly these illustrations aren't illustrating 7% anymore.  You have to add the spread (the difference between the earning rate and loan borrowing rate) of 2%.  Now at age 65 until the end of the policyholders life, the policy is assuming a 9% return each year.  Can that happen??  I hope you're shaking your head.

Well, if it doesn't happen, will the life insurance company take responsibility for the lack of performance? The answer is NO. You bear full responsibility, NOT the insurance carrier. They wisely offloaded the risk of performance to a stock index and tied the expenses of the policy to an increasing cost structure. Brilliant move for them, not so much for you if you're thinking long-term for retirement.

I will admit the IUL has a lot of sizzle but you need rose covered glasses to cover up the faults in this type of insurance plan. Buyer beware is what I would caution any prospective client taking a look at this type of policy. My recommendation would be to compare guarantees of any IUL with similarly designed dividend paying Whole Life policy.

You buy a life insurance contract for what it will do, not for what you hope it will do. It's great if it works out, but when it comes to your retirement, you need to do better than hope and pray you made the right decision. This is especially true if you are only planning to own one type of permanent life insurance vehicle for tax-free asset accumulation.

For a further discussion on the various types of life insurance contracts available to you, contact me at http://jlmwealthstrategies.com/contact-us/ or call (925)386-6639. I'm happy to discuss whether you are looking for an advisor to work with or you are an advisor and would like more information about different products and strategies to employ for your practice.


Posted by JLM Wealth Strategies at 10:59 AM No comments: